In 1964 the GPO placed an order with STC for the new Trimphone (the first four digits stood for Tone Ringing Illuminated Model), the initial model being the 712, available in three two-tone colours. The 712 became generally available as a rental model (7/6d per quarter!) in 1966. Trimphone 722 was an improved version introduced in 1970; and this example, the 2/722F was introduced in May 1972. The Trimphone had a tone-ringer in place of a bell, and was very light in weight compared to the 700 series.

Our example has faded a little in the sunshine (evenly), but has no scratches, dents, or cracks.  It went into the Refurbishment Factory in Cwmcarn, Wales in February 1975 and February 1982.

The curly and line jack cords are fine.

It is in good condition and works in the United Kingdom if you have pulse dialling.

Remember that dial telephones need to have PULSE DIALLING on your telephone line to be able to dial out. Even if you had TONE DIALLING, which is the other form of dialling that you may have, they will still ring on an incoming call, and you would still be able to pick up the call and talk, but you would NOT be able to dial out. All BT lines have pulse dialling but some of the smaller cable companies do not offer this. 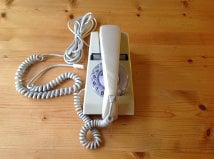