Issued for the Entertaining Envelopes campaign

Printed in Litho by Walsall

UNMOUNTED MINT AND IN EXCELLENT CONDITION

Will be specially packed in a board-backed envelope with a “Flyweight” stiffener.

The first Post Office Label Sheet, LS01, was issued for The Stamp Show 2000 Exhibition on 22nd May 2000. Visitors could purchase sheets of 10 x 1st class stamps in the “Smiles” designs (as Concise catalogue numbers 1550/9). As a result the service has continued under the name SMILERS.  There are now over one hundred official Royal Mail Smilers Sheets. There are also several hundred of the non-Royal Mail versions available from various outlets.

The first Personalised Smilers Sheet (PSS) also sprang from the Generic Smilers Sheet (LS01). This was issued for the “The Stamp Show 2000” on 22nd May 2000. Visitors could choose to have their photos taken in a booth. The picture was then printed alongside each stamp in place of the normal se-tenant label.

This service then continued under the banner of Personalised Smilers (sometimes called Customised Smilers). First of all the service started with the Christmas 2000 issue. Sheets were available with first or second class stamps. Subsequent issues had ten, or more normally, twenty stamps per sheet.

The early PSS had a Post Office Code, generally situated bottom left of the sheet. This code seemed to be quite a miss-mash of letters and numbers and it was difficult to understand their meaning. However an F in the code generally meant first class, while an S referred to second class stamps.

First of all a white box with a code appeared at the bottom left of the sheet. This was first noticed on the  Occasions set issued 23rd April 2002 (LS07). Furthermore,  Royal Mail included an SM** code in this box alongside a customer reference.  It seem like the customer reference referred to Royal Mail’s Delivery Note number. SM01 was allocated to the blue 1st class “Occasions” stamp in a sheet of twenty. In conclusion, the SM** numbering went through to SM30. This was the “Fun Fruit & Veg” PSS from 7th March 2006.

With the advent of definitive sized Smilers Stamps, the SM** code changed to the DS** range. Hence the first was the “Special Moments LS23”. DS01 was allocated to the ‘Red white & blue’ sheet featuring 20 x 1st class Union Flags. DS22 was the final code before they changed yet again. Hence DS22 was allocated to the Northern Ireland 1st class ‘green fields’ issued 11th March 2007.

Notwithstanding the above notes, the codes were often just a series of letters and numbers. Sometimes with an empty box! We even had deliveries of the same PSS, but on different days, with totally different codes!

We have used a mixture of codes to denote our Personalised Smilers Sheets. The predominant one being from Ridgewood Publishing’s “Customised Stamp Sheets of Great Britain”. Furthermore we have the Gibbons Concise Catalogue number. We also have the Philatelic Bureau reference for Generic Sheets, and finally the SM** or DS** codes. Thus the White Ensign PSS issued 21st June 2005 is: CS024 (LS25/AT017/SM24). The approximate valuation is from Ridgewoods. 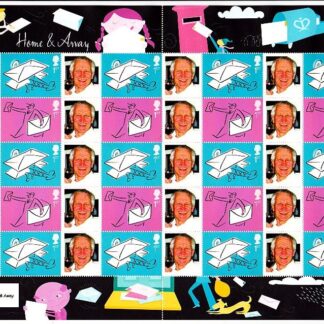